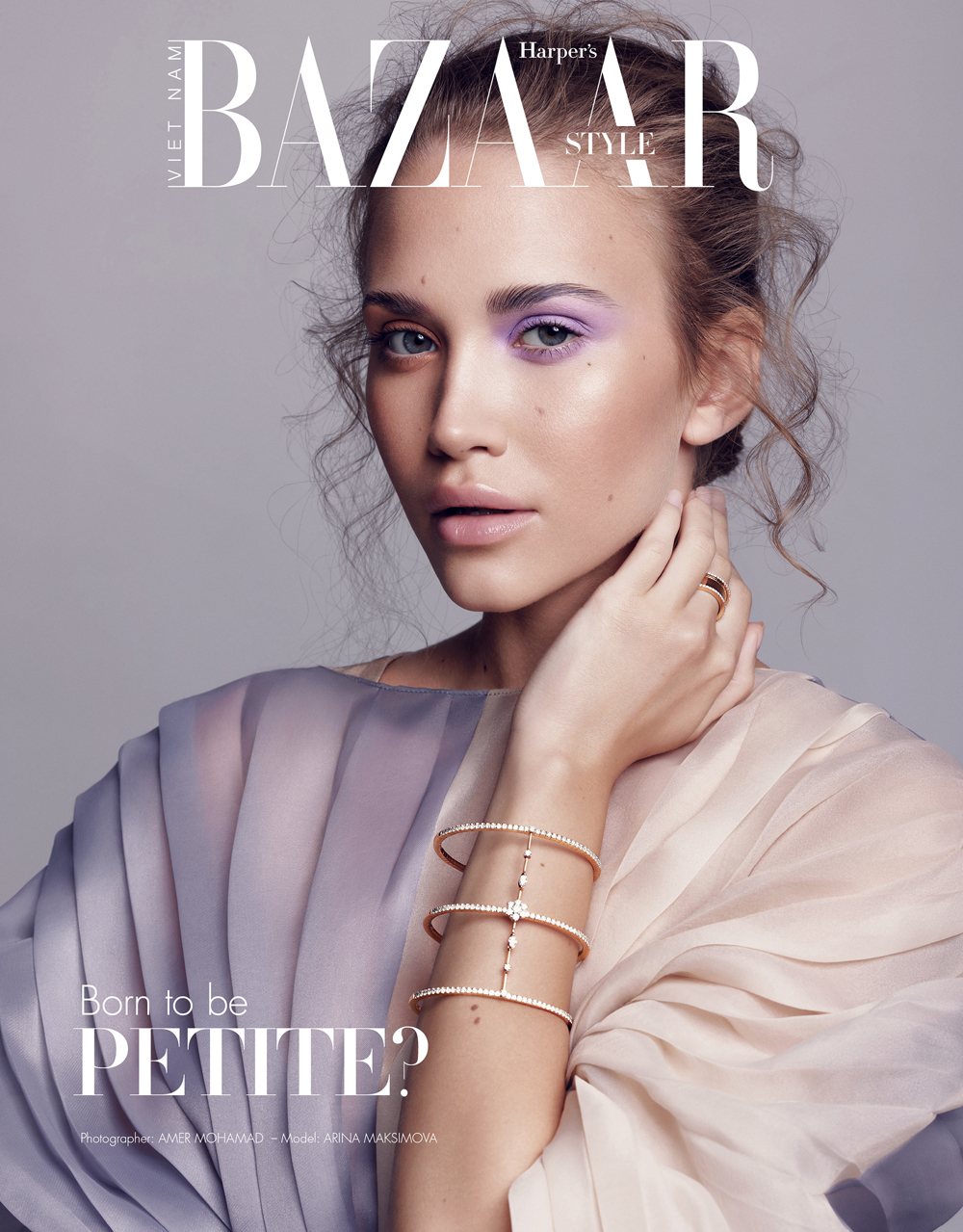 Arina Maksimova is the muse of Amer Mohamad in this “Proud to be petite” photo story. Dress, Illustrella. Bracelets and ring, La Marquise.

Restrained colors are compensated by the richness of textures: folds, pleatings, weavings, voluminous woven patterns, and smoothness of silk. Nude makeup with a bright accent on the eyes creates the illusion of complete naturalness of color spots and lines. If you want brighter tones, you can add more saturated colors and accessories to match. 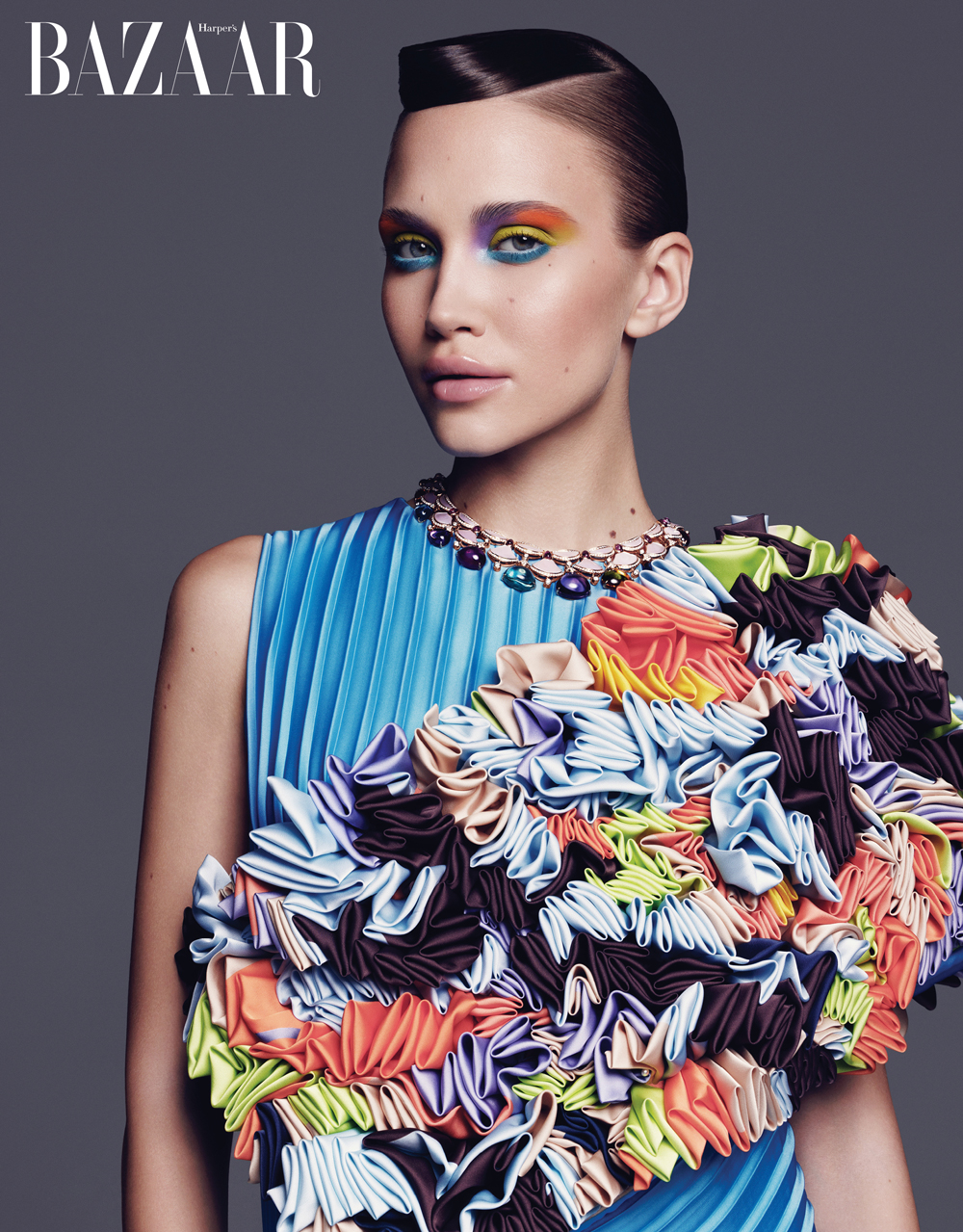 Did you notice anything unusual about this photo story? No? It’s the height of the model. Arina Maksimova is 158 centimeters. 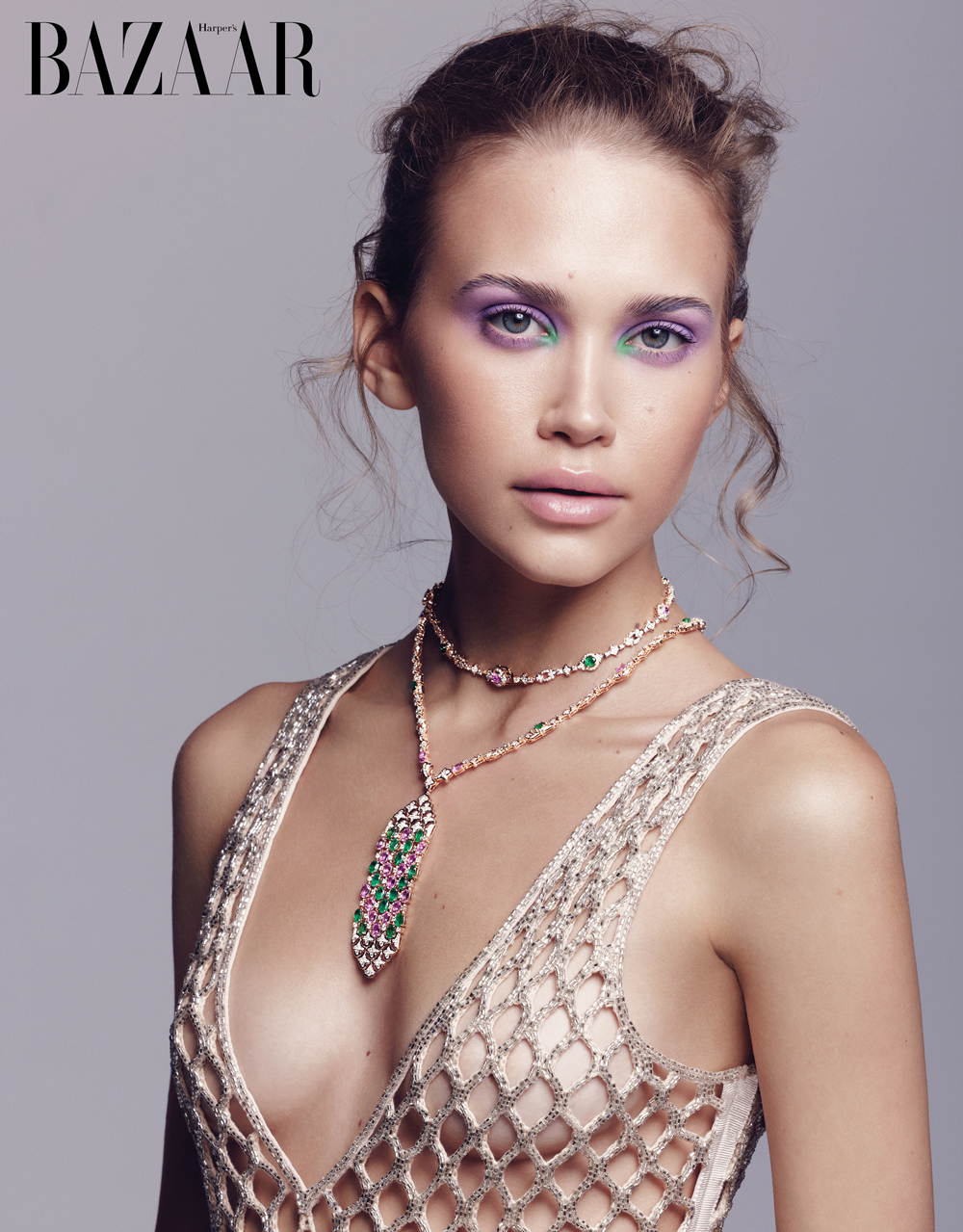 In the fashion world, there is an unspeakable rule on the height of models. Arina Maksimova sees it as her mission to change the view of people in the fashion industry. Listen to her tale.

It’s quite hard for me to get a place in this industry. Six years ago, no one talked about body positivity. An idea about a short girl in the model industry could shock all agencies. I almost gave up at that time. One day I found some progressive professionals who got inspired by me. I asked them to give me a chance to work abroad. That meant they would provide me, as other models, flight tickets, accommodation and all castings. If I would not get a job during the next 3 months and earn enough to cover their expenses on me, I would have to pay them back personally. In the end I made more than enough. I used the same approach to get model contracts all over the world. Unfortunately, my case is one in a million. The reality is if you are shorter than 175 cm, you won’t get a job in this industry. I believe it’s time to talk openly to people about height discrimination. Right now I try to involve as many professionals and brands in my campaign. I hope people in this industry would become more familiar with petite models. 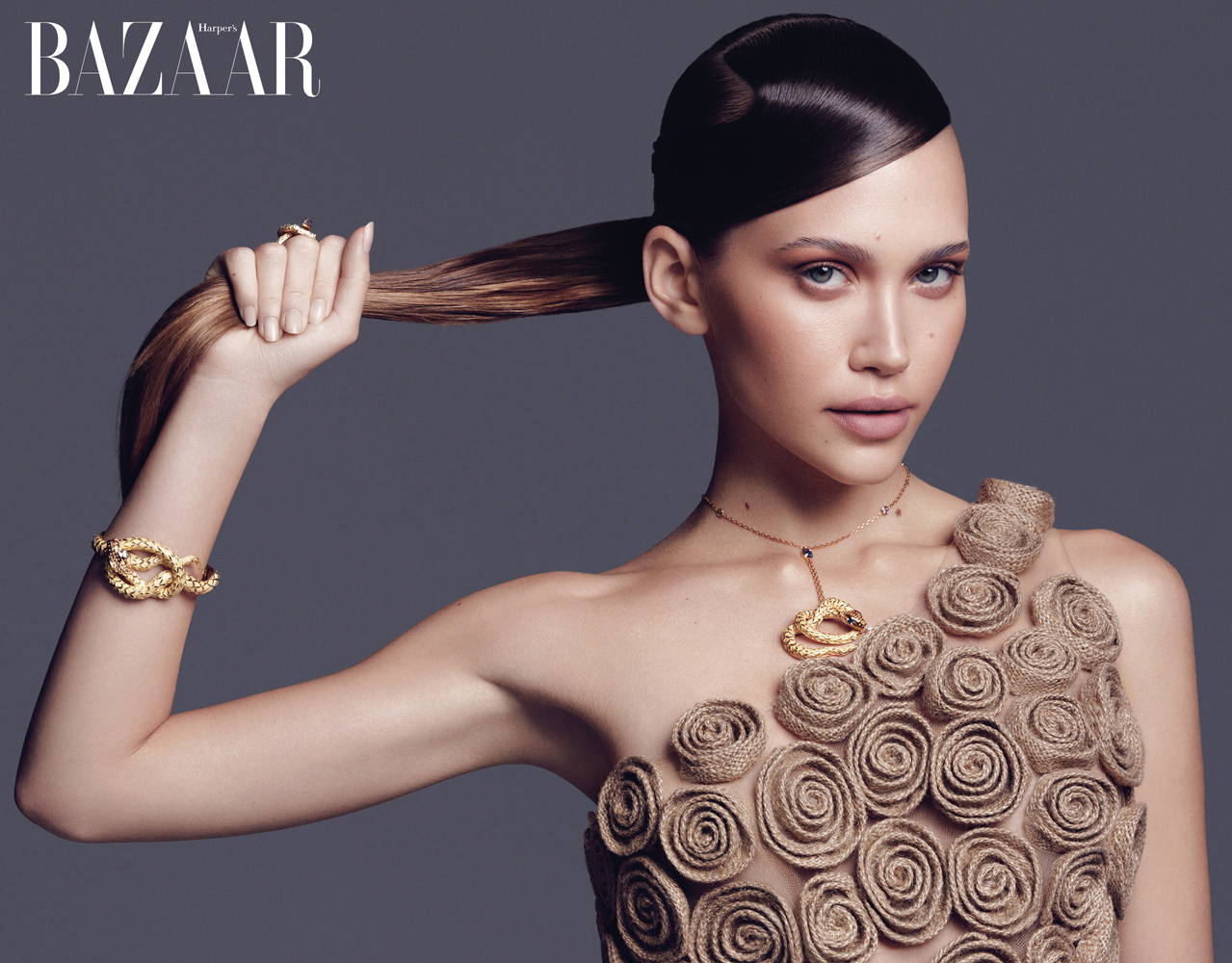 Amer Mohamad has similar ideas. He said, “I am sure that the most important thing for a model is her personality. Her charisma makes her unique and outstanding.” He expressed his appreciation for Arina Maksimova’s professionalism, “Arina and I met in one of the shoots in Asia. There is not such a strict approach to the height of models. Arina hooked me with her character. She is easy to work with and very hardworking. I’m very pleased with the results. Does height matter if a model looks gorgeous in the photos?” 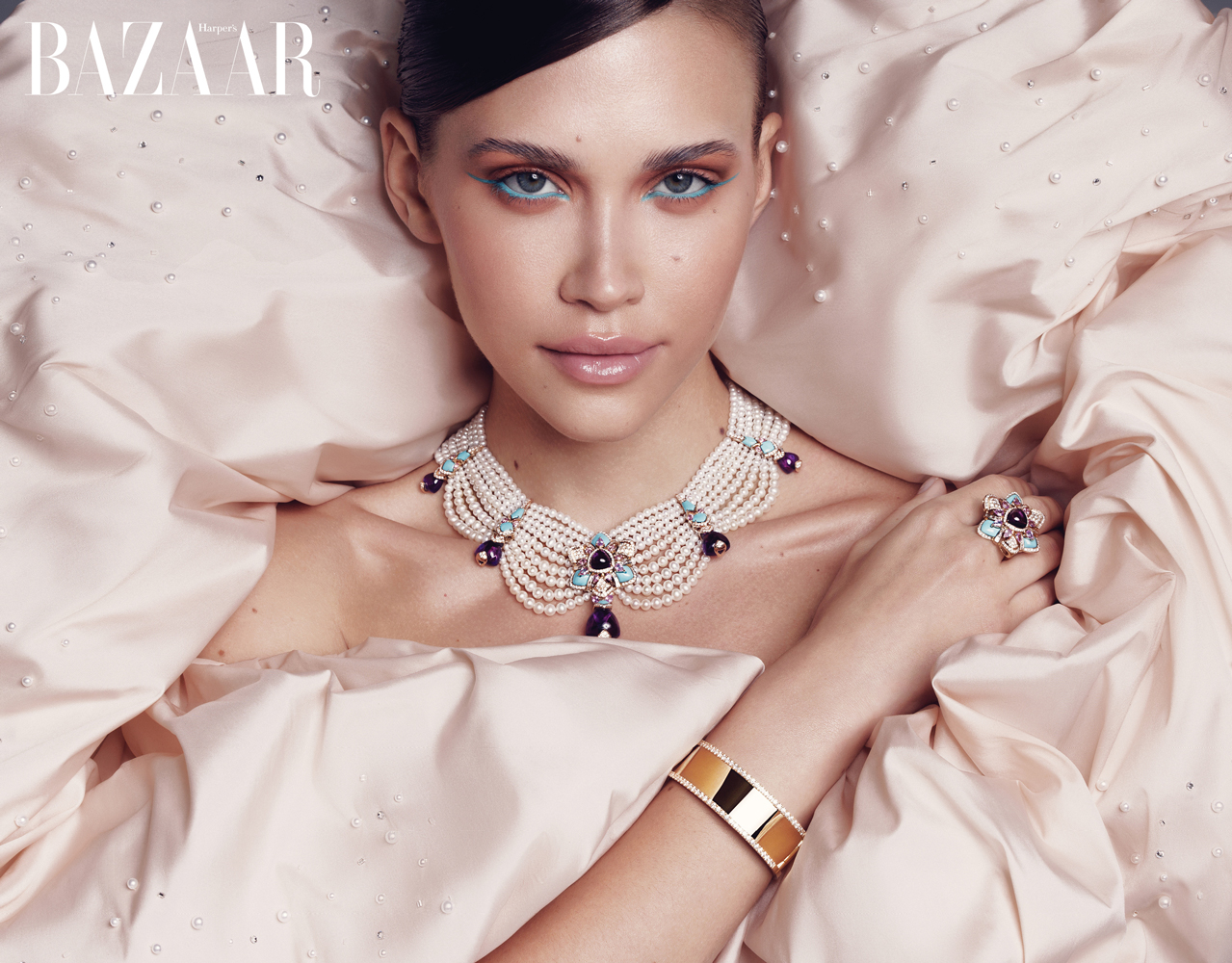